If multiple circuit boards are pooled together for processing (structure, vias, surface), it is called a panel or multiplier. This is useful e.g.  for small circuit boards, due to reasons of economy and better handling. Also the PCB board assembly and soldering can be simplified by a panelized production.

In order to avoid excessive mechanical stress during subsequent separation of the (possibly assembled) PCBs, the contours of the individual circuit boards are provided with scoring notches and / or milled grooves. This separation process is referred to as scoring or milling with bridges to break-out, which can also be combined. 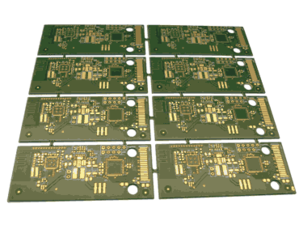 The maximum processable panel for the manufacturer is called production panel. For cost reasons, all PCBs (also concurrently from different clients), are produced in such a panel. All circuit boards with the same specifications can be placed on such a production panel (e.g. FR4 thickness, trace width, solder mask color).

PCB Experts only Requirements for distributors

Some features of this website need your consent to remember who you are.